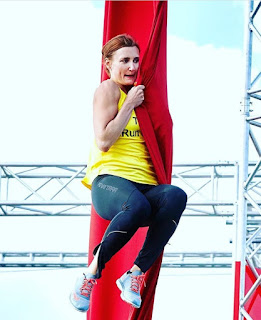 As I (finally) sat down to write this post, it has been months since filming Team Ninja Warrior Denmark. I have been trying to avoid this moment, but with the TV premier coming up really soon, there is no way around it.

When I initially started training for Ninja Warrior, I was going for the individual one. However, that show was replaced with Team Ninja Warrior. I found Kristian and Tim, we applied, were called in for casting and in the end we got the call to be on the show. It had been my goal for such a long time, to get on the show, and suddenly it became a reality.

People who know me, know that I have been training for this for a while. I wanted to do well, and I had VERY high expectations for myself and my performance! When I walked up on the start platform for the first time, I was so confident! I knew I could do the obstacles. Four easy steps and I was on the rope, but for some reason I panic and end up in the water. I was SHOCKED! I still can't believe it happened. Thanks to Tim and Kristian we get to do the relay. I was petrified of the ropes! Didn't want to go back on that platform. I let my fears control me, and I decided to do the second part of the relay course! What a stupid decision! Out of all the mistakes I made that day, this is the one that had been hunting me the most ever since! Kristian is in the lead when he gets to the net. Now it's my turn! I start stressing, I'm determined not to go too low on the rope, instead I go too high, and can't get enough swing to reach the cargo net. I end up in the water again! Somehow Tim manage to save us from my stupid mistakes and we make it to the second round.

While the other two team battles for the opponent spot in the final part of the show, I walk around in a haze. I have no confidence, and absolutely no faith in my abilities. I realise that I have never done anything with a rope before, I have rope burns on right hand, and I literally debated just jumping in the ocean by Docken (where it was recorded) and just swim away. Suddenly it's time for me to go up on the platform again. I have no faith in myself or what I am about to do. I decide just to go slow! I manage to cross the first to set of rope swings, and I get through the the curtains, I get to the cargo net. I remember looking down on Tim and Kristian and asking them where to grab the rope. I jump and I end up in the water yet AGAIN! I basically just wanna sit down, hide and cry, but we have to do the long relay. This time I go first, and I need to pass the first 3 obstacles, including the cargo net.

We step up on the platform, Louise walks up there with lots of confidence, and I just wanted to be invisible. We start, I getthrough the ropes, on to the curtains, and suddenly I realise that Louise in the water behind me. That moment is still crystal clear in my mind!! It was like the fog in my brain suddenly disappeared and I could think again. I get though the curtains, and I'm ready for the cargo net! I miss it on the first go, but as I start to swing back I remember thinking "pull your feet up, and use the opposite wall to kick off", I do that, I swing under the cargo net, as I recall I was hanging with my back to the water, looking up on the net. I remember grabbing it. In that second I knew I would get through it! It was such a great feeling crawling through that net.
Tim and Kristian perform perfectly and we win the relay! It was amazing!! So much fun and so much adrenaline pumping (didn't even realise I had a 3 cm cut on the shin until later that day). Unfortunately, we didn't get to the semifinals.

When I got home that evening, I slowly started to process the day. I broke down in tears. This was in no way the performance I had expected for myself. First of all I didn't get to show off my awesome ninja skills, that I know I have! I didn't get a chance to show my upper body strength, or to beat the warped wall! However, I did get s chance to show people that fears control me, that as soon as something goes wrong I panic! Many people have asked me what the most difficult part of Team Ninja Warrior was. And for me it wasn't the obstacles, for me it was the mental part! I was in no way prepared for that! So I panicked every single time I was racing against someone, instead of doing what I have trained for. On that last cargo net, when I was by myself, I had no pressure from someone being next to me, that was when I could perform! I definitely need to work on my mental game, and face my fears, that is my weakness!

After filming ended I needed to prove myself to myself. So two days after Team Ninja Warrior I did a 115kg deadlift PR, I was still so angry and frustrated by my performance so the barbell didn't stand a chance. A week later I decide to run Copenhagen Warrior, which is an obstacle course race, I still felt the need to prove myself, and to prove that I was worth it and that I can do obstacles! I came fourth, and with that I had found a new addiction.

The TV premier is only hours away, and I'm so scared! I'm scared of how people are going to react, I am scared to disappoint people I know. But most of all, I am scared because I have to face my failure. I'm forced to face my fears tonight, I think that's a good thing! I really hope the saying "what doesn't kill you only makes you stronger" is true - but in either case, we're about to find out!

In the end I wouldn't be without my Team Ninja Warrior experience, it gave me a new deadlift PR (YAY for heavy lifting) and it introduced me to Obstacle Course Racing. I have met so many incredible and amazing ninjas and OCR runners. Now it's time to focus on OCR World Championship in Canada this October. It's gonna be tough and challenging, but I am so happy that I qualified for it, and I'm super excited! And for my Ninja Warrior career, I'll be back! I'm not done with that course just yet, I need to beat that wall!