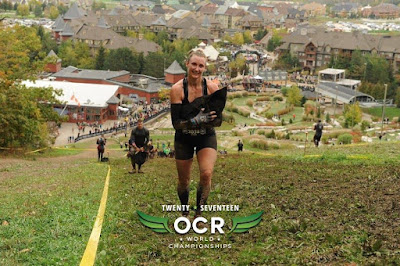 I hardly even know where to begin with this post. After the European Championship I was ready to go to Canada and kick ass! I fractured my hand, and everything changed. From when my cast got off and I was allowed to do upper body workouts again I had 8 weeks before I stood on the start line in Blue Mountains.

Leading up to the OCRWC my body was just feeling off, my chiropractor said it quite well, my body just hadn't been in balance since I fractured my hand. Both my running and upper body just felt off. When I got to Blue Mountains I wasn't nervous at all, which is funny, because I normally get nervous about a race days in advance, but not this time. I knew there were at least one obstacle I would potentially struggle with, so during the Friday's 3km race, I spent lots of time watching athletes on the "La Gaffe" obstacle, my conclusion was it seemed durable. I decided I was as ready as I would be; not much else to do before the race other than just relax.

Race Day
Surprisingly I had no trouble sleeping the night before the race, which is often my problem. Got to the starting area, and I wasn't nervous at all - but even worse I did not look forward to racing and my body just felt heavy. I decided to take it one obstacle at the time, focus was not on the placement but on keeping my wristband for as long as possible.

In front of me I had 15 km, 43 obstacles and 5 accents up the skiing slopes! The first 5 km took 1 hour! The hills were so muddy, it was so difficult to climb up and so slippery to run down, at times I had to crawl on all four just to get up the hills. As I ran/walked/crawled I started thinking, this was no fun at all, the obstacles were rather boring on the first third of the course; walls, hurdles, and more walls, maybe the name should be "Obstacle Course Walking". 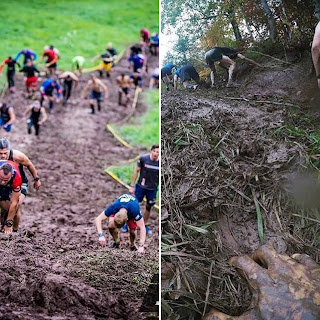 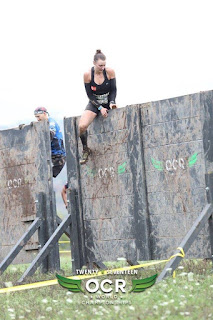 We finally got to a monkey bar, I was a little concerned about this was as it was slippery and just the fact that I have never been a fan Monkey bars. Got through on my first attempt, so that was one concern to cross off the obstacle-concern list. Next on the list was La Gaffe, an obstacle consisting of three poles you have to climbing across and tilt in order to reach the next pole. In the past these kind of obstacles have not been my friend; at OCRWC 2016 I lost my band on a pole obstacle during the 3 km race, and at OCREC 2017 I seriously struggled getting through a similar obstacle. However, before coming to Canada I had sought out some pole dancing advise, and it paid off! Got through on my first attempt without any struggle, I was so stoked and just shouted out "YES!" when I got through, suddenly it was a little more fun, but I still knew I had to take it one obstacle at the time - you never know what will happen. I had found my rhythem on the running and just went in my own pace, which paid off because I stated passing some of the other girls in my heat.

Stairway to Heaven
Soon it was time for Stairway to Heaven. When I got to it, I decided to take one of my Nutramino gels - needed it little extra energy before going head to head with this obstacle. I decided I had been procrastinating long enough and went to the obstacle. No problem at all, just climbed my way up. did the transition and then back down again! I was so happy! As I continued on the course I reminded myself to not get carried away, it only takes one obstacle to stop you. Next up was a very muddy army crawl uphill, this obstacle was probably the worst on the entire course. It was mean and just so long, luckily I knew that there was a water station on top of the hill so that was what I kept thinking about while I crawled through mud under the wire. After the water station it was time to face the Urban Sky obstacle. It was three sections (I think), first it was Ovals, then the Snake and at the end two Spinning Wheels with a ring in the middle. Each section ended with a bell you had to hit with your hand. 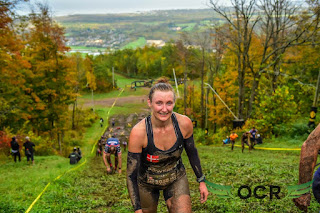 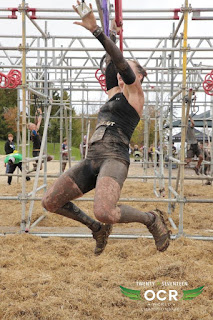 I knew that some of the hardest and more grip intensive obstacles where still a head of me, so focus was on just conquering the next obstacle. Up until now I had conquered all obstacles on my first attempt, but when I got to the balance beam I simply just slid off, it was logs and they were covered in mud. For a moment I started thinking "oh so this is the obstacle that will stop me this time". I took a few deep breaths and tried again, I was very focused on tightening my core and not fall. I did see a few people slip and they took some hard falls - I got through. Soon it was time for rope climb, this was the obstacle where I lost my band at the OCRWC 2016 as my hands were ripped to pieces and I couldn't hold on to the rope. That day I fell twice from about 4 meter and landed in a stack of hay, since then I have always been worried about falling when I do rope climb (even though nothing happened to me that day). Nonetheless, I got through this on my first attempt, next up was the first Platinum rig, not a problem swung my way through, on to the wreck bag carry up and down a muddy slope, now there were only 5 obstacles left before the finish line. 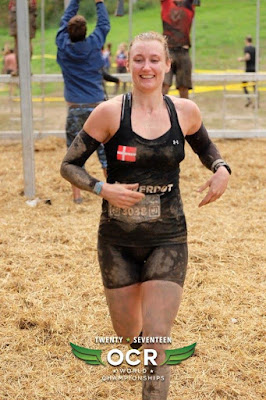 After the wreck bag it was the second Platinum rig, my confidence was back, so I decided to skip a few of the holds, but swung too fast and just flew right off one of the rings. Went straight to the retry lane, a little wiser this time, and made it through on the second attempt.
There were only a few meters before the Skull Valley, must admit I didn't worry about this obstacles "it's climbing holds, you got this" had been my thought. I went straight at it, got through the first part, on to the monkey bars, and on to the second part of the skulls. I got about half way through on the final section, and then my arms and grip just died. I had never had that happen to me before, they simply just died, I could not hold on to the hold and I fell off - only two holds from the bell. It was like my grip just disappeared from one second to the next. I just walked over and sat down, I knew I had to relax a little otherwise there was no chance that I would get through the obstacle. After a few minutes I decided to try again. Got through the first section of the skulls, on to the the monkey bars, and on to the last section of the skulls. I found my momentum, and worked my way through the section. I got to the second to last skull and considered trying to reach for the bell, at the last moment I changed my mind "I didn't work my way through this, just to do a stupid mistake at the end and fall off" I moved to the last hold, reached for the bell and hit it! Now 3 obstacles were between me and the finish line. I got through both the Skyline and Floating walls on my first try, only one obstacle left.

I must admit my first try on the last obstacle, a wall called the Knot, was a half-hearted try. I didn't get enough speed and barely got hold of the rope, there was on the wall. I knew I could conquer the wall and it HAD to happen, I was not giving up on a rather simple obstacle. I stretched my forearms a bit so, at least mentally, I felt my grip was better. I walked back, looked at the wall and started running. I got a lot higher on the wall this time, grabbed the rope and started crawling over the wall, when I got to the top of the wall I knew I was going to finish with my wristband (see video below). I jumped down and sprinted to the finish line - that was the fastest I ran that day (pace 3.20 according to my Garmin Connect), I wasn't gonna let anyone pass me.
I finished 8th in my age group and 44th out of all the women who ran in the different age groups (692 in total and 147 in my age group), only 17,3% of all women at the OCR World Championship finished with the wristbands, where as 50,9% of all men finished with their wristbands. 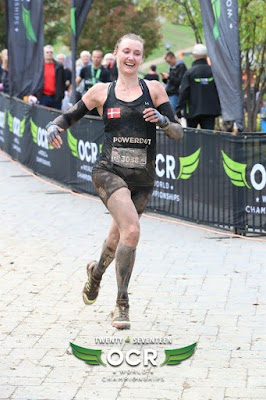 What's next
I still can't really explain how I feel about the race, to be honest, I feel a little odd. I am beyond happy that after the last few months I was still able to finish in Top 10 which was a goal I set for the OCR World Championship 2017 in the end of 2016. However, what I am used to from OCR Championships is to fight, being frustrated, crying, fight a little more and then conquer a certain obstacle, often called Stairway to Heaven. This time I didn't spend hours conquering one obstacle, the most I spend was two attempts, which costed me a few extra minutes on four obstacles. The feeling and joy of overcoming an obstacle after fighting with it for hours, never came, because I never ended up in the situation, and that leaves me with an odd feeling. Though now I know how it feels to run through a Championship race and actually be capable of completing most obstacles (39 out of 43) on my first attempt, and that felt great!

The next few months focus will be on getting stronger and faster. I have an idea of what I want for the OCR 2018 season, but more about that later 😊