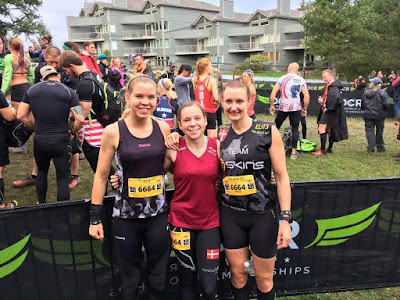 Sunday it was time for the Team Relay. After doing the first team relay at the OCR European Championship this summer, I was really excited about it, the setup is so much fun.
Mica and I had decided to team up again and this time we had asked Ulrikke to join us. Ulrikke would do the technical leg, Mica the speed and I would do the strength part. All three of us had competed in the Age Group divisions on Saturday, but we had decided we wanted to run in the Pro division for the team relay, as we never get to compete against the US and Canadian elite.

Mudland
If I thought it had been muddy on the Saturday, I was dead wrong. That night it had been pouring down, and it started raining soon after the runners had been sent off. The obstacles were so slippery, and you saw some of the best athletes in the world struggle with simple obstacles, because it was so wet and the obstacles were covered in mud.
Suddenly I saw Mica running up towards me and I got soooo excited, she had done so well! I got the chip from her, grabbed two sandbags and started my farmers walk up the hill. The sandbags were heavier than on Saturday because the sand was wet from all the rain. I kept a steady pace, my arms started to feel longer and longer, and my legs quickly started to burn. I refused to set the sandbags down, I knew if I did that once I would do it several times, mentally that just wasn't an option, I just had to suck it up and keep going. I started passing a few of the other girls, suddenly the carry was fun. It started to become a race, how many can I pass? I soon got to the top, and had to turn around and walk back down. Oh my, that was slippery! I took it easy as I had seen so many of the men just slide down the slope - I wasn't about to do that. I made it safely down, drop the sandbags, and ran through the rest of the mud to Ulrikke. I pass her the chip and off she went. After one obstacle, it was my turn again, I grabbed the chip and ran up to the wreck bag I had to carry up and down another slope/hill. 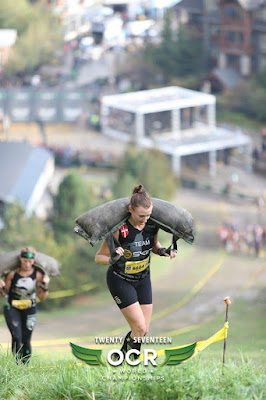 I definitely got the easy part of the relay, I kept a good pace and started passing more girls on my way up. Again I was a little slower on the decent, it was just so damn muddy. I got down, dropped the wreck bag and ran to Ulrikke with the chip.

Team work
Ulrikke went on to do the last 5 technical obstacles before, we as a team, would crawl over the last wall together. While we waited for Ulrikke, Mica and I were studying all the other teams and their technique on the wall. Before the start we decided on a technique and we still felt that would be the best approach.
Suddenly someone shouts at us; Ulrikke is standing at the first rig and is struggling. Mica and I sprint to the rig. We see Ulrikke, the look on her face was absolutely heartbreaking, both Mica and I got tears in our eyes. Mica and I start loosing Ulrikke's arms and pep-talking her the best we can. Ulrikke prepares herself for another attempt on the rig, and she flies through it with Mica and I on the sideline cheering. Ulrikke had a bit of a running stretch before she came to the second rig. Mica and I were waiting for her when she got there, but she flew straight through that one as well without any problems. The next obstacle was the Skull Valley, but no problems there, she flew through that one as well. Ulrikke crushed the next two obstacles and it was time for us to face the wall as a team. 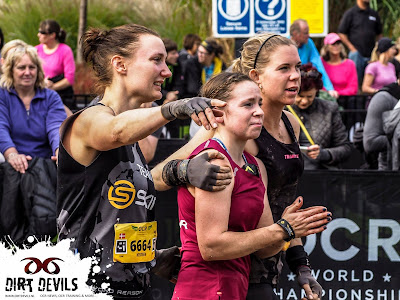 We went to the wall, first Mica and I helped Ulrikke up, then I helped Mica up, both of them were hanging on the wall, now it was my turn to crawl up (see videos below). I somehow manged to crwal up, without having to pull either Ulrikke or Mica down, we all made it over the wall and started running towards the finish line together. 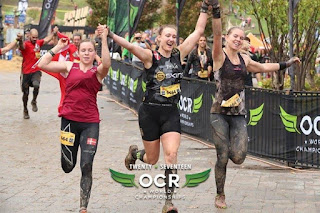 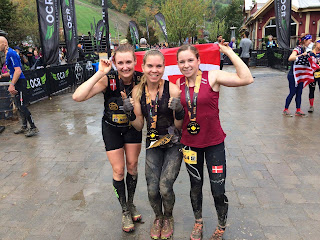 In hindsight one can always start wondering "what would have happened if we had done it differently" but bottom line, this is how we did it, and I'm so proud of these two girls and how they fought to conquer the obstacles so we could finish with three wristbands intact as a team.

Team relays are so much fun, can't wait for the OCR European Championship in Denmark in 2018  😊