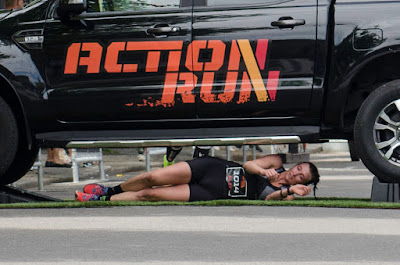 NB! This race was the week before Nordic Race Strandparken, which might explain a lot of my thoughts leading up to that race.

So my little secret of the season is that I signed up for the Action Run Tour 2018. This means that I will do four races; Gothenburg, Malmoe, Västerås, and Stockholm. The first race was on May 12th in Gothenburg, I was really looking forward to the first race, as there was no pressure and no one really knew I was there, which was a huge relief for me.

Going into the race, my goal was top 3, that got changed to top 5 when I saw the startlist and the names of some of the best Swedish female OCR athletes.

This was the first shorter OCR race I've had this season, so I decided to change my warm up plan, as it often takes me about 5-7km to get warm. For Action Run that's only 8km I would need a proper warm up, otherwise I wouldn't be warm before the race was more or less over. I considered that before going into the race, and it was part of my game plan:

I didn't really think too much about it going into the race, but it was about 25 degrees and sunny in Gothenburg, but figured my hydration level was good enough. Also, I did Strong Viking in Ghent, the race was more than twice as long and the weather was warmer. 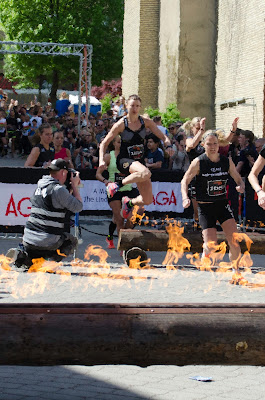 I decided to push my pace from the beginning and try to keep up with the super fast athletes. It was a fast start, I was hanging on to the top 3 when we got to the third obstacle, a simple wall. I was slow getting over it and other girls caught up with me. Next up was a hill and stairs, but I just didn't feel strong, I already felt like this was really tough, but we were less than 1km into the race.
Over a few more obstacles and I was running with two other girls, trying to catch up with the three girls leading. We got to the Ninja Steps, there were three lanes, one behind a tree and the other two lanes were next to each other. The other two girls went first, I considered going for the lane behind the tree, but figured I wouldn't get a proper go at it with the tree in my way, so decided to wait for the others to clear it. In hindsight that was mistake number 1; the steps were easy, I should have gone for the third lane, mentally that would have given me a kick, because I was much quicker on them than one of the others.

We got through some running, I tried to push my pace, and picked up the distance on the other two on especially downhill running. We got through one other obtacle and then on to Roman Rings. You had to do a rope climb to get to the rings, the other girls jumped up the rope and used the momentum to get the rings going. Me?? Nooooo I decide to do a rope climb up the rope, grab a ring, use the rope to get momentum and then do the rings. Need I say that the other two girls were gone and a third one caught up with me on the rings. Mentally I was struggling before, no need to say that I was struggling even more after the rings.

The rigs
I managed to keep up with the girl who caught up with me on the rings. I took the lead at one point, miss a left turn have to run back, she didn't miss the turn - now I was behind again. After a few obstacles, we got to one of the rigs I had worried about before hand. It had short ropes, and cannonballs, so wasn't sure how I would do. Action Run has wristbands, you have 3 attempts on each obstacle if you fail, you will loose your band. I climbed the rope up to the rig, used my head, was smart about what hand I placed where, and I got through. I don't recall the sense of "hell yes I did it"-feeling, I was just struggling. Again I tried to push my pace on the running, but it didn't work. I seriously started doubting myself, "why am I doing this? I don't even like it! And I am no good!"
We got to some off road rocky hills, I was all over the place, completely lost my footing and was just a big mess. I honestly don't remember much from the race, I recall bits and pieces from here and there but I can't really put it together (and writing this, it's only been 48 hours since the race and I remember more from my Strong Viking race in April). I got through ther other rig on my first try without any issues, but I honestly don't remember where it was. 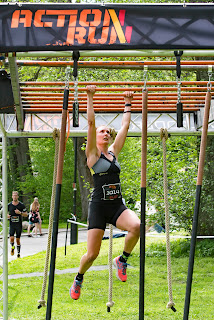 I remember getting to the floating walls, got through them continued running, and thought of forgot what I was doing. I run downhill and suddenly I just stop, I had no idea where to go. A girl was walking passed me and said "I think you should have turned up there" - GREAT! I run back up the hill and turn. At this point I basically don't care anymore, I seriously feel like I am slowly dying, on the bright side, it's a short race, so it's almost over😄 I get to the Monkey bar and I KNOW the finish line is very close, this just needs to end NOW! I get through the Monkey bar using the right technique that I have started to practice, but I wasn't happy about it, couldn't really care less.

I knew I was almost at the finish line. Crawled over a container, got to one of two cargo nets! Normally I would do some kind of side roll to get over, but screw it "I am gonna do a forward roll over the cargo net, who cares, I'm just too tired to do anything else!" 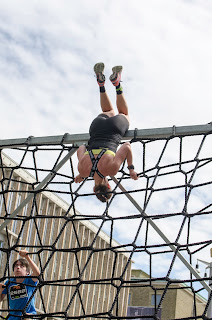 And so I did. Rolled under a car, then up on a balance bar, rolled under another car, forward roll over a net, and only two obstacles left!

The finish line
I got to the second to last obstacle, the Ramp. There was one girl at the ramp when I got there. I decided to catch my breath and then go for it. Made it on my first try without any struggle. Started running towards the Rolling Conveyor Belt, which was the last obstacle. Suddenly I heard the crowd behind me cheer, and figured the other girl got over the Ramp.
I got to the last obstacle; never in my life have a walked up the wrong way on an escalator, now I have to run up it? I start running, jump up on the belt, get about 2/3 up and then I don't get any further, I just roll back down. I am done, and my legs have no power. I take some deep breaths, but most of all I just wanna lay down and be done with it. I talk to Tim, who pushes me to run, I start out strong and I get almost to the top and then I run out of power "if I fail now I only have one attempt left! Just get hold of the edge!" I get hold of the edge "DON'T LET GO!!!" I think it's fair to say that I looked like a stranded seal trying to get up on an ice floe  😅 My upper body was laying on the edge while my feet were still running on the belt. Somehow, I manage to get up on the platform and push the red finish button, I was done! I sat done on the staircase leading down from the platform, I did not feel well. 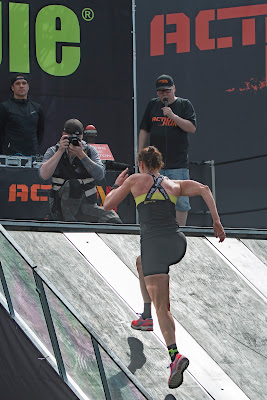 So what did I learn?
That's a question I have been asking myself for a little more than 48 hours by now. I know I can do better, I just wasn't good enough on Saturday, I had no excuses, I was slow on obstacles and I could not push my pace on the running, I finished 7th overall  which was just disappointing. All the joy and happiness I had when i finished both Strong Viking Races this season just wasn't there. Instead the joy was replaced with; do I want to do OCR? I love the training, but I don't like the competition.
Ironically enough I signed up for the 2018 OCR European Championship Standard Course the day after the race. To many people that may sound strange, but I promised myself this winter that I would do the OCREC and then decide if I want to continue with OCR. In order to keep that promise to myself, I have to compete, so I will.

Later on I realized an important part of my game plan is to focus on my own race and trust my pace and pass other athletes. From a single trail running training I realized I am much better when I am in front, mentally I am much stronger when leading. If I am behind, I basically just start getting annoyed at myself for not being able to keep up or being in front. I guess I have some mental training to do leading up to the OCREC 😊

So what does a stranded seal on a moving conveyor belt look like, you might think? Well, have a look at the video and you will know 😁