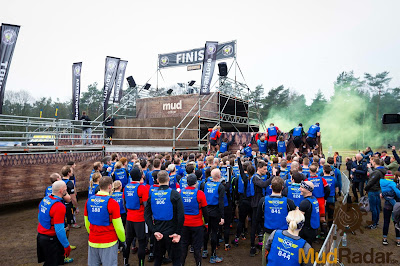 So my first OCR race in 2018 was 19km Strong Viking OCR Series this Saturday. Back in December when I signed up for the race I decided that this was sort of my "all or nothing race", meaning that either it would be one of my last OCR races or I would continue racing, depending on my experience at the race. To be honest I hated all the races I did post my fractured hand, so basically the last 6 months of 2017.

Going into this race I didn't know who was racing, I had no idea what obstacles I was facing, because they all had random names I didn't understand. The race was called "Mud Edition" which is kind of ironic since I sort of declared war on muddy races after Nordic Race MX. But for some reason I was really calm, compared to how I normally get. The fact that I didn't know any of the other racers were such a relief, I didn't have to worry about how I would place compared to them or if I "ought to" beat them.

Two days before the race I decided to write down my goals for the race, they were:

I knew my challenges would be claustrophobia with certain obstacles, and nerves meaning I wouldn't get enough sleep the night before the race.

I decided I only needed to focus on 4 things:
On the day of the race I didn't really get as nervous as I normally do and I actually slept okay compared to previous races. The fact that I knew there where no wristband, but penalty rounds if I failed an obstacle was so comforting; that meant I would be able to complete the race no matter what obstacle I met.

The race
At Strong Viking new racers in the OCR Series run with a blue bip and the elite racers in a yellow bip. We were a lot of racers starting at the same time (see above), so the first many kilometers where about passing other racers. I started passing some of the girls in yellow bibs, thanks to my many 20km trail runs these past few months, I knew I just had to keep a steady pace then I could take them on the longer running stretches, which I did.

About 5km into the race I got to the obstacle "Throw the hammer", I had tried this once before, and apparently I am not very talented when it comes to throwing things and hitting a target. It took me an impressive 9 attempts before I manage to hit the target with the hammer (ups 😂), well suddenly I had two girls in yellow bibs to catch up with again. but lucky for me, there were still about 15km left and lots of heavier obstacles, so I knew it was just a matter of time before I would pass them again.

We got to the one obstacle I had worried about beforehand, "Tilting Tunnels", as I am really claustrophobic and you had to crawl through a pipe and when you got to the middle it tilted. I was chasing this one girl from Belgium when we got to this, so no time to panic, and surprise surprise it wasn't bad at all. 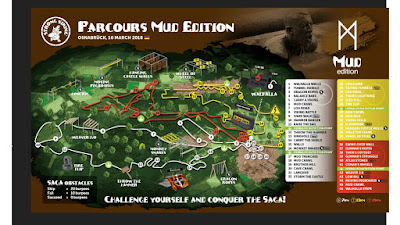 I passed the girl from Belgium and went on to catch up with the other girl I had seen. I caught up with her at "Carry the Shield" where you run with a hammer and a shield. Without sounding mean, I really enjoy passing people on the carry obstacles, so I was very motivated to chase her down, pass her, and just keep on running with the hammer and shield 😃

These were the last two girls I saw on the course, I had no idea how many girls where ahead of me or how far ahead they were, with about 7km to go some spectators told me I was 9th or 10th. Nevertheless, instead of focusing on that, I decided to focus on my own race again.

The obstacles
When we got to the race site on the morning of the race, I saw that the second to last obstacle was flying monkey (luckily for my mental game, this was NOT on the original course map). I freaked out a little (in my defense I didn't freak out too much 😏) since I still do not feel a 100% confident with this obstacle when I don't have any safety mattress underneath. But on some of the longer running stretches on the course I started pep talking myself, I knew I could do it, I just needed to trust myself; and I have practiced a lot at fitnessdk Nygårdsvej the last few weeks. Also doing Flying Monkey in a race is on my list of goals for 2018. Nevertheless, before I had to face Flying Monkey I had about 8 kilometers left and lots of other obstacles to conquer.
I started passing some of the men in the yellow bibs, it was clear that people had started to get tired and perhaps hadn't kept up on their running over the winter. I sent Michael, my running coach, many positive thoughts out there, because my running was going GREAT!

In total I failed 4 obstacles, where I had to do a penalty lap. The first obstacle I failed was Bålkläder's obstacle which was blue shirts where they tied a knot on for grip. I approached it as an obstacle I wanted to do as I would do any other simple sideway obstacle, however, in hindsight I should have thought of it as nunchucks. Nonetheless, off I went on my penalty lap. Lucky for me they differentiated jerrycans for men and women at this obstacle (only place where I saw that they differentiated between men and women). The reason I was happy about this, was that so many men had failed the obstacle too, so they were waiting for the others on the penalty lap to return with the jerrycans. I grabbed one of the pink jerrycans tossed it up on my shoulder and started running. It was a long penalty lap and I started worrying if any of the other girls would pass me. When I got to the end, I could see that the other pink jerrycan was gone, so I knew the girl behind me was out on the penalty lap too 😌

The next obstacle I failed was "Gunnar's Struggle". Here you jump horizontally with a bar, over a few steps and then back down to the other side. I got to the top of the last step and then the bar just rolled in my hand and I lost my grip. The penalty lap was farmers walk with a box in each hand.
When I got to about 16km I started getting tired, I knew the route was 19,8km so I had about 4km left. When I got to 18km I knew I only had 2km left, which made me pick up my pace again.

Flying Monkey
When I got to the event area, I knew I was almost at the finish line. First up was a weaver, I thought it was over/under the logs and then over the net, and then over/under the logs until I got to the other end, but NO. It was over/under the logs and then UNDER the net and then over/under the logs. It was tough, but I got through and off to the next obstacle. At this point I was tired! I got to the "Low Rig", which wasn't really a low rig nor a "normal" rig; it was something in between so it was actually quite difficult, I got about 1/3 of the way and then I died. I went to the penalty area, only to find that it was 2 minutes burpees. I must admit those burpees where the most pathetic burpees I have ever done in my entire life 😅 I was about 100 meters from the finish line, however, I knew I still had a very long "Moving Pegboard" and "Flying Monkey". My two minute burpees penalty was up and I moved on to pegboards, I got halfway through the pegboards, but I was dead and just dropped down. On to the penalty lab, grabbed a jerrycan, started running, crawled under the net and on to "Flying Monkey". The guy in front of me gave up and jumped down, now it's my turn. I knew I could do it, I just needed a little more power, compared to what i normally do at fitnessdk, as this distance was about 1,5m and fdk is probably around 1,1-1,2m. I got the first one, and then I knew I could do the second jump too, and so I did! 😃 Then all there was left to do was to hit the bell with my hand, I was SO careful, and did not let go of the bar with my right hand before my left hand had touched that bell! When I jumped down, I think I just yelled out "YEEEEEEESSSSSSSS" I was SOOOOOOOOO happy! I ran to the last obstacle, which was "Valhalla Steps", so sort of a staircase with three walls, jumped up and crossed the finish line after 20,08km with the biggest smile on my face ever 😄 Also knowing that I can know cross off one of my goals for 2018 😜 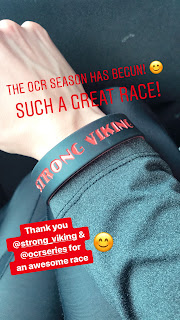 My actual placement isn't important to me, I am so proud of this race, my mental approach to it, and the way I handled everything out on that course and the way I just had faith in myself and my abilities. Trusting myself after failing two technical obstacles in a row and still do Flying Monkey and complete it, is such a positive step for me. This is definitely only my first of hopefully many more Strong Viking Beast races.

What's next
With the race done, I am definitely ready to plan some more OCR races, because this race is definitely my favorite race I have ever done. It's not my best placement, it was not the most technical obstacles, but I felt so good out on the course, and handle everything I came across without getting angry or frustrated; even when I threw the hammer on the 9th attempt, I was still as calm and controlled as I was on the first attempt, which is very much unlike me as I often get angry and frustrated when things don't go my way. And those are my take aways from this race! 😍

In the end I finished 7th overall, and OCR World Championship has changed the qualification criteria, which means that it is top 10 who qualifies for OCRWC Pro division and not top 5. Therefore, I HAVE MY QUALIFICATION 😊